Use our craftsmanship to set your standards.

Founded almost 100 years ago in the Hallertau region, since 2003 we have specialized in showroom concepts and furniture for the automotive industry. Our customers today include Germany’s leading car manufacturers, who place their trust in us to deliver ideas and furnishings which present their brands at a consistently high level.

Our success is based on three cornerstones – the highest quality; absolute adherence to delivery deadlines and outstanding cost-effectiveness. What our customers appreciate most is the fact that we are still a family-run company. The advantages? Direct contact persons; personal customer service and fast decisions. 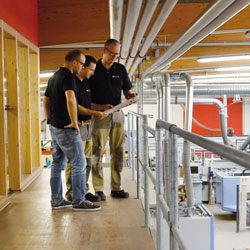 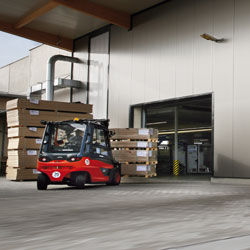 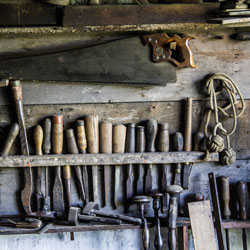 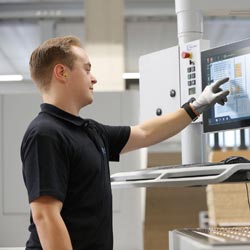 Industry 4.0? For us, it is not merely a concept but part of our everyday working life. We are innovative thinkers, focusing on solutions. Which is why we use hi-tech production machines from HOMAG. They are centrally controlled and include software for monitoring and controlling purposes. Meaning that we always know what condition our machines are in and if they need to be serviced. We can thus take timely action where required, in turn ensuring that we are able to meet agreed deadlines.

We will continue to expand our networked systems in future and you will soon be able to experience our master production control system. The advantage? Our entire manufacturing process will be even more flexible and transparent. 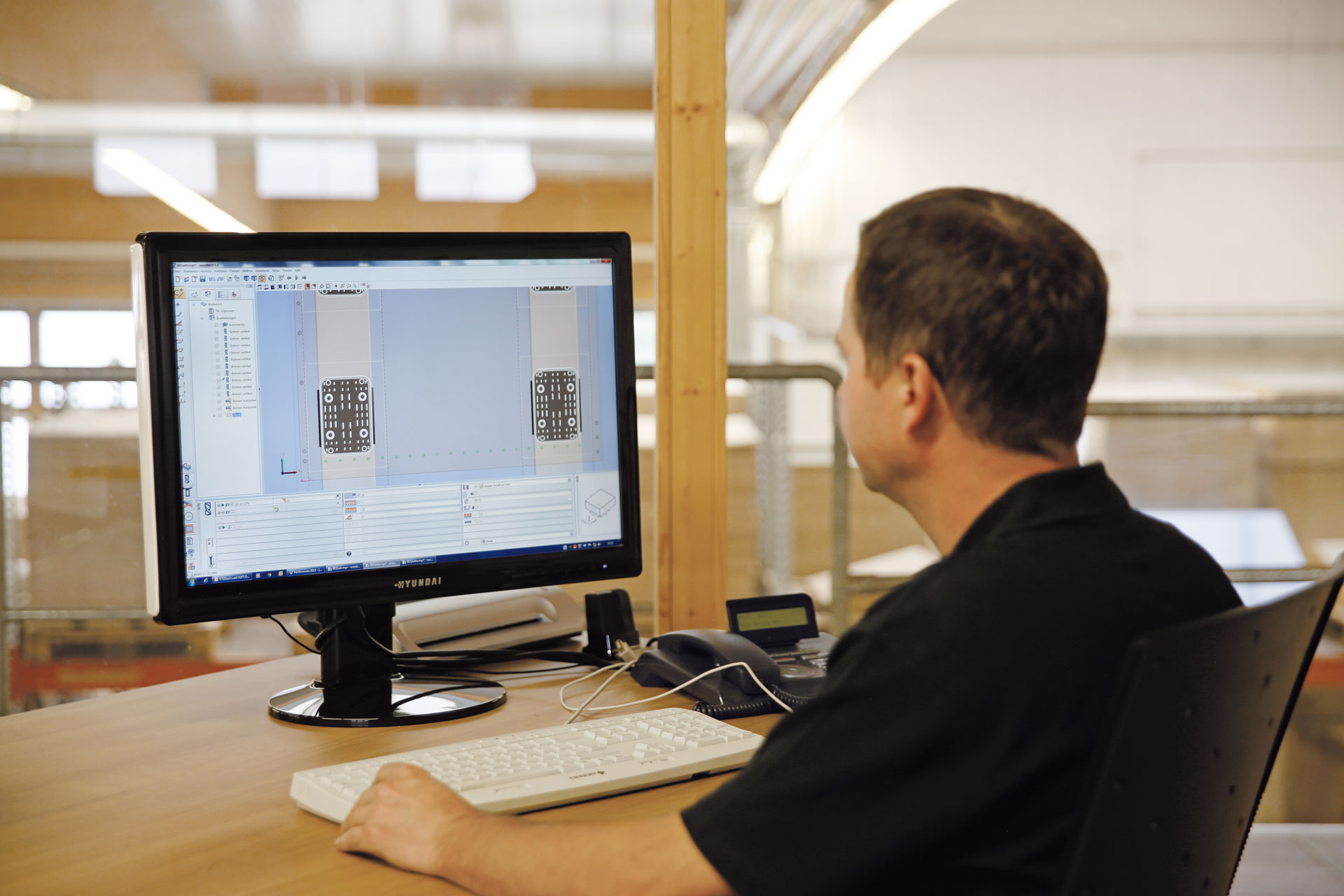 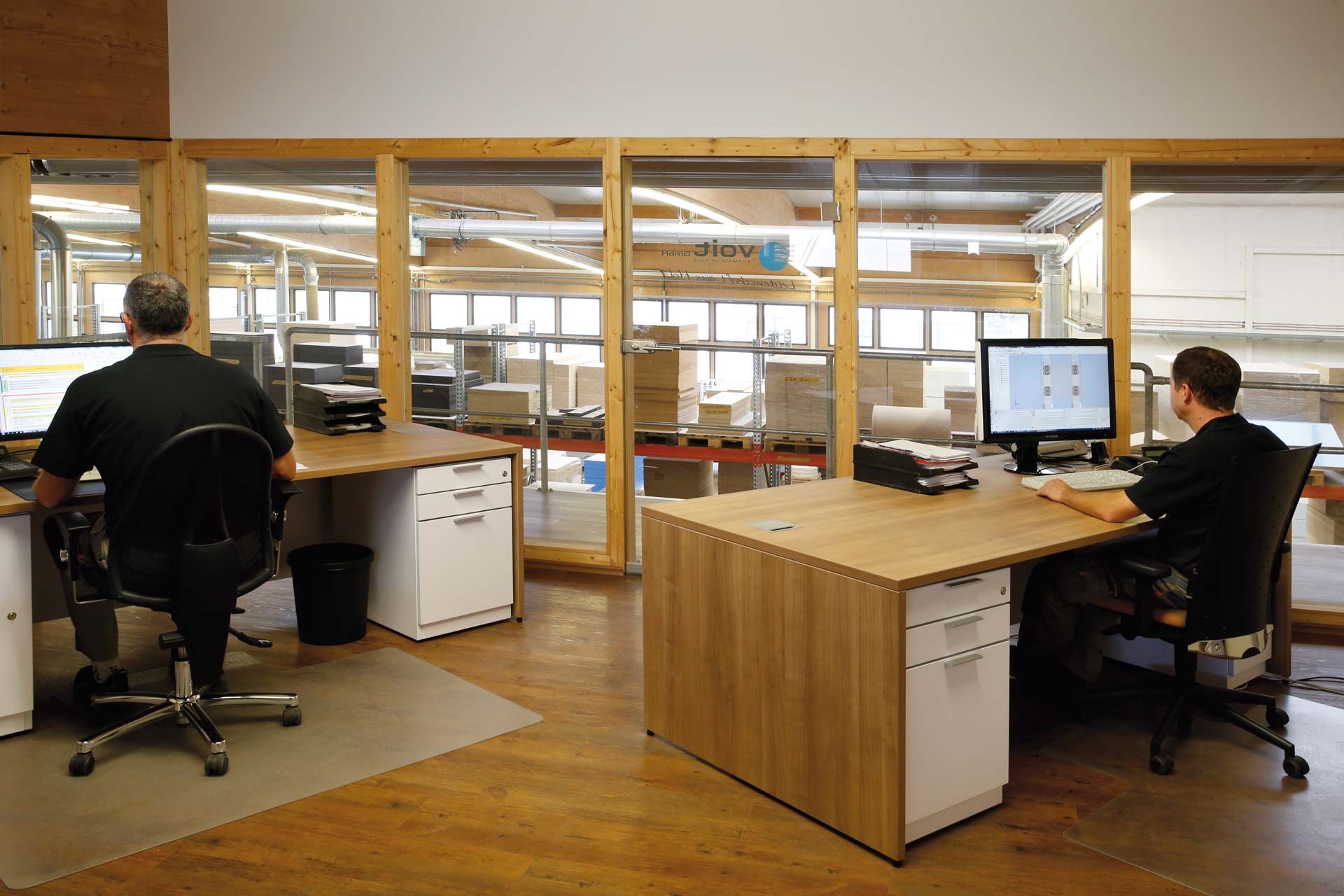 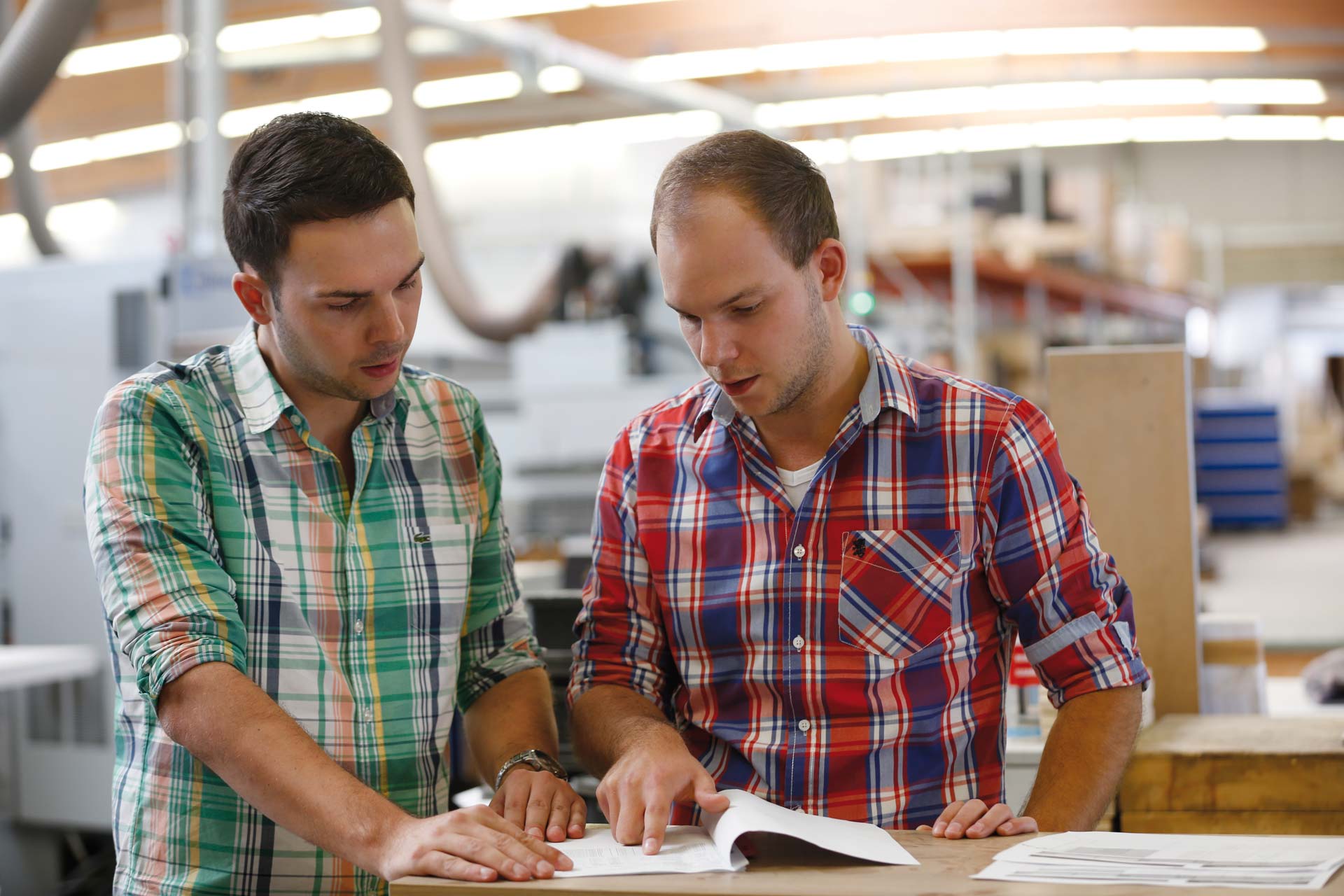 Use our help to achieve ambitious goals.

Whether you only require one piece of furniture or a large quantity of items – we can deliver. To a consistently high quality. Ensured using one of Germany’s most innovative cutting cells; edging facilities from PU through hot-melt adhesives to lasers and, last but not least, modern construction systems.

Our machines, production facilities and packing area occupy a space of some 8 500 m². This is where we build the furniture which rightly bears the “Made in Germany” quality mark and where we prove that it is possible to make high-quality, long-lasting but also competitively-priced furniture in Germany.

You are also welcome to make use of our skills as contract fitters, shop fitters, exhibition stand builders and joiners. Simply consider us as your extended workbench – ready whenever you need us. 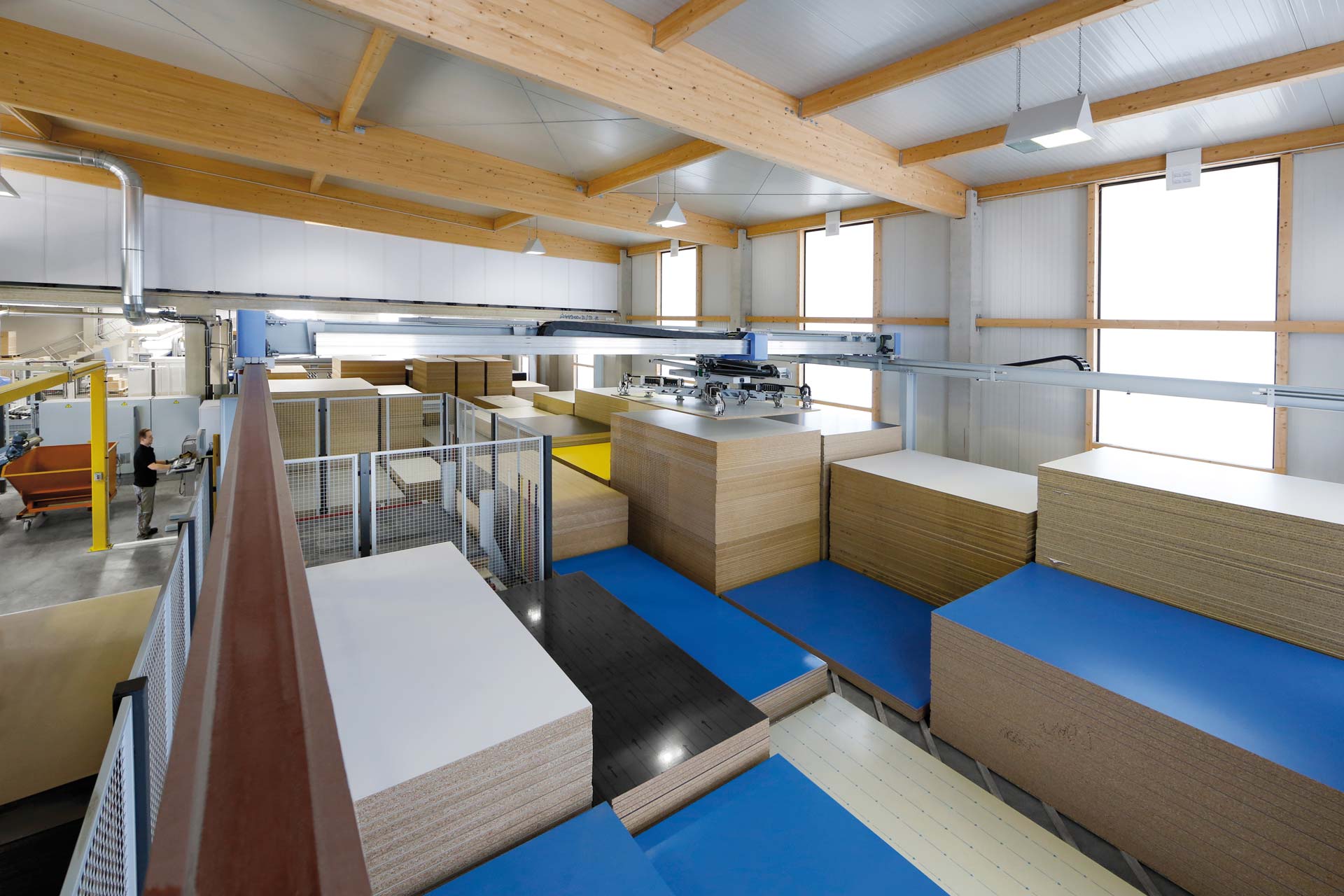 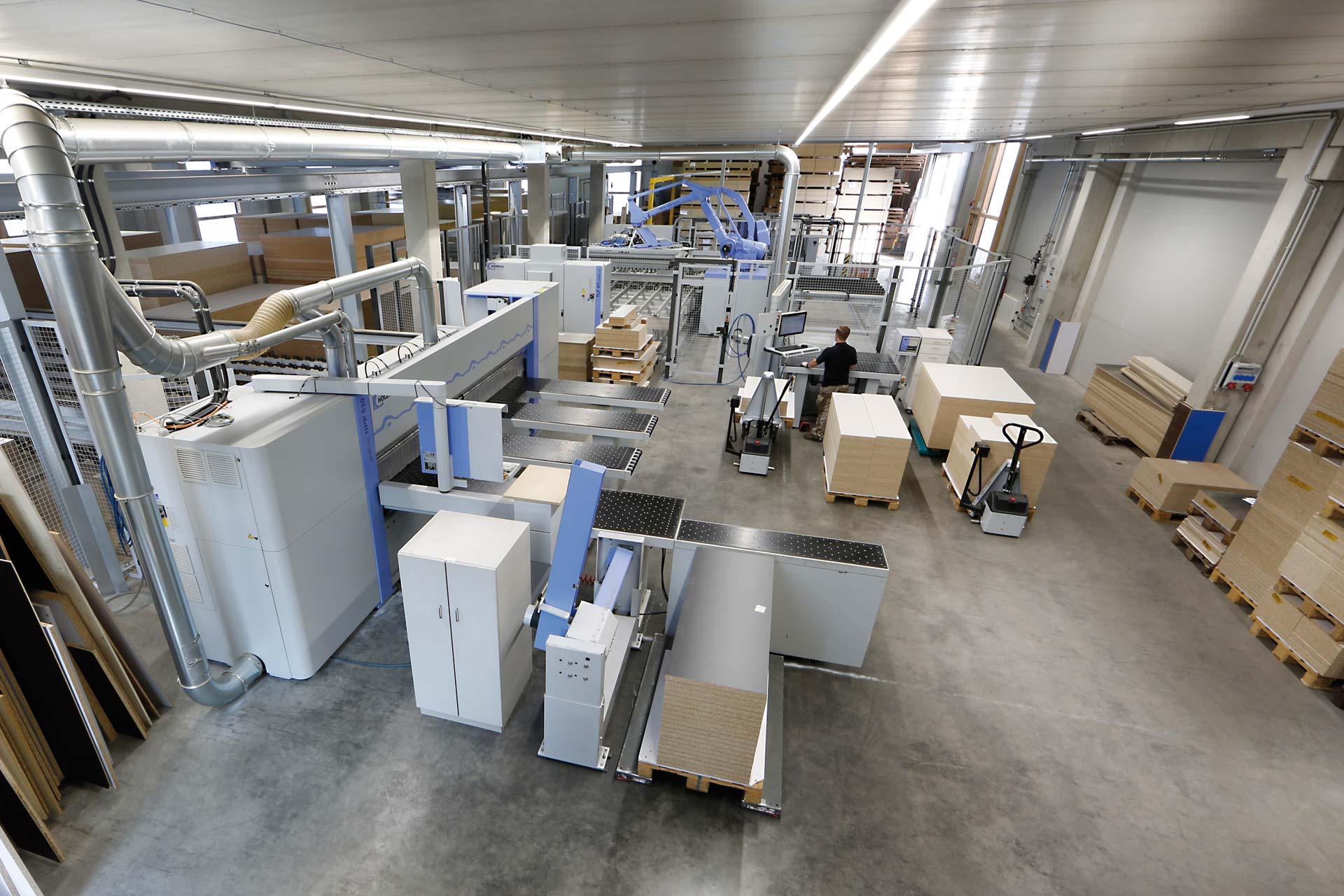 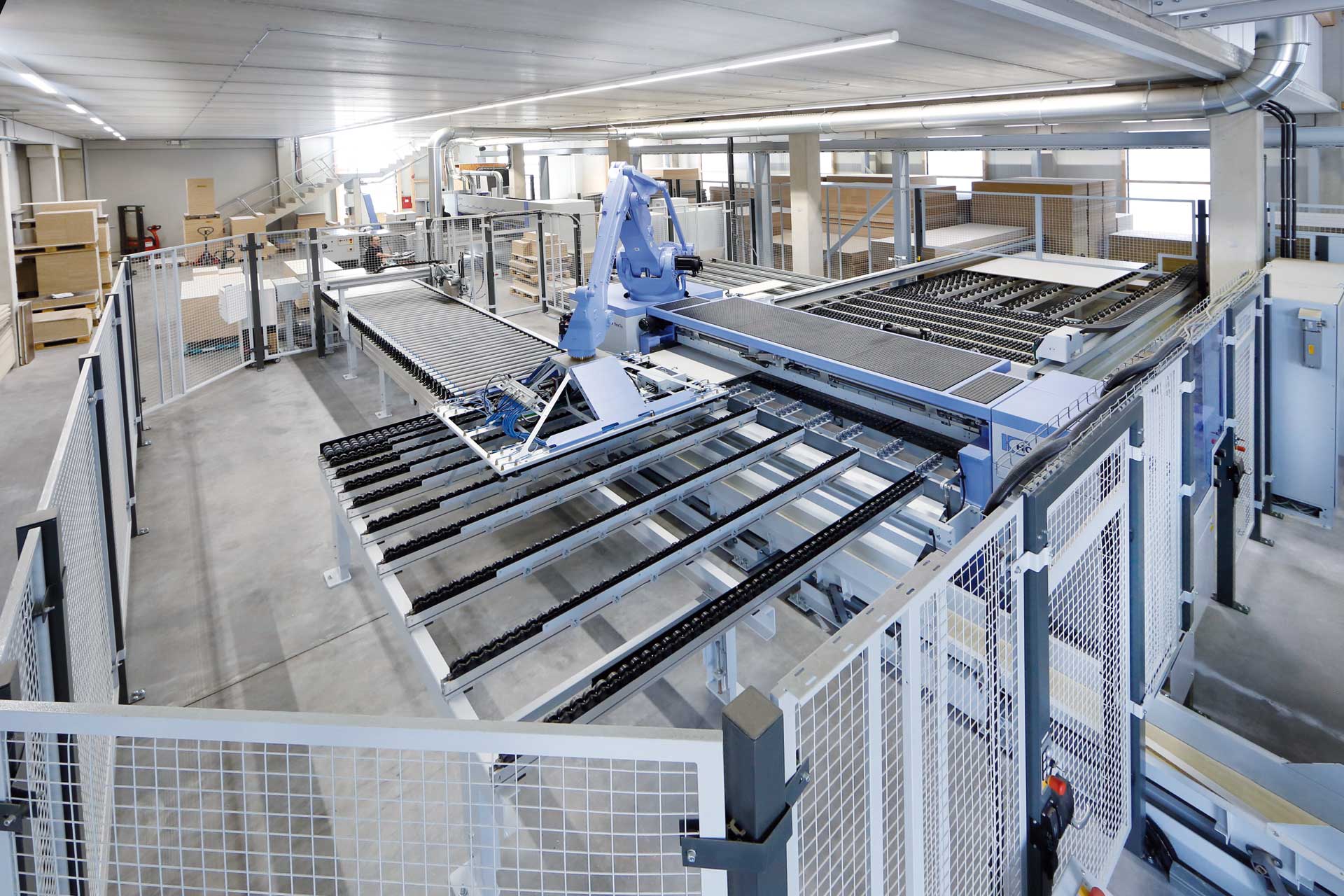 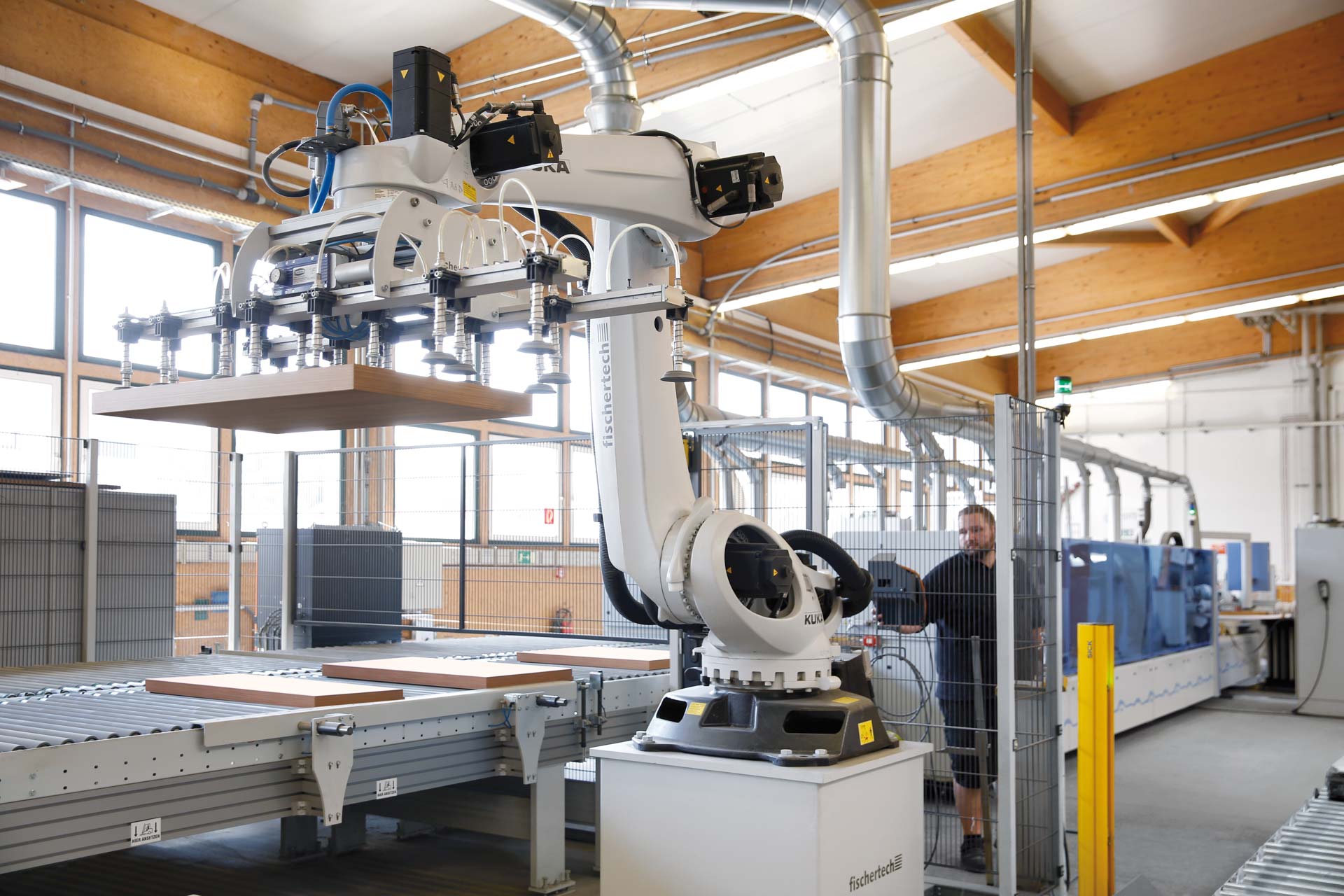 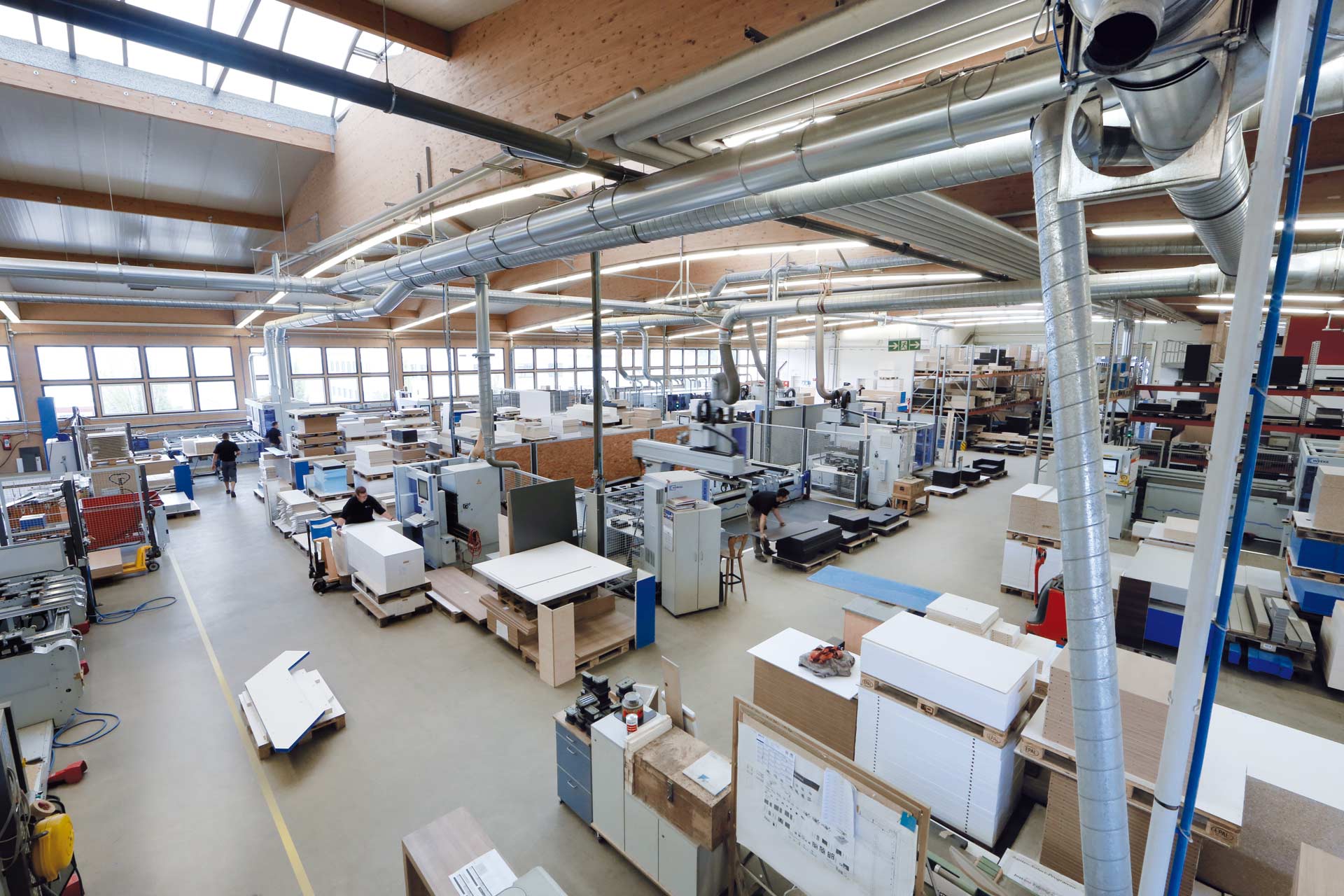 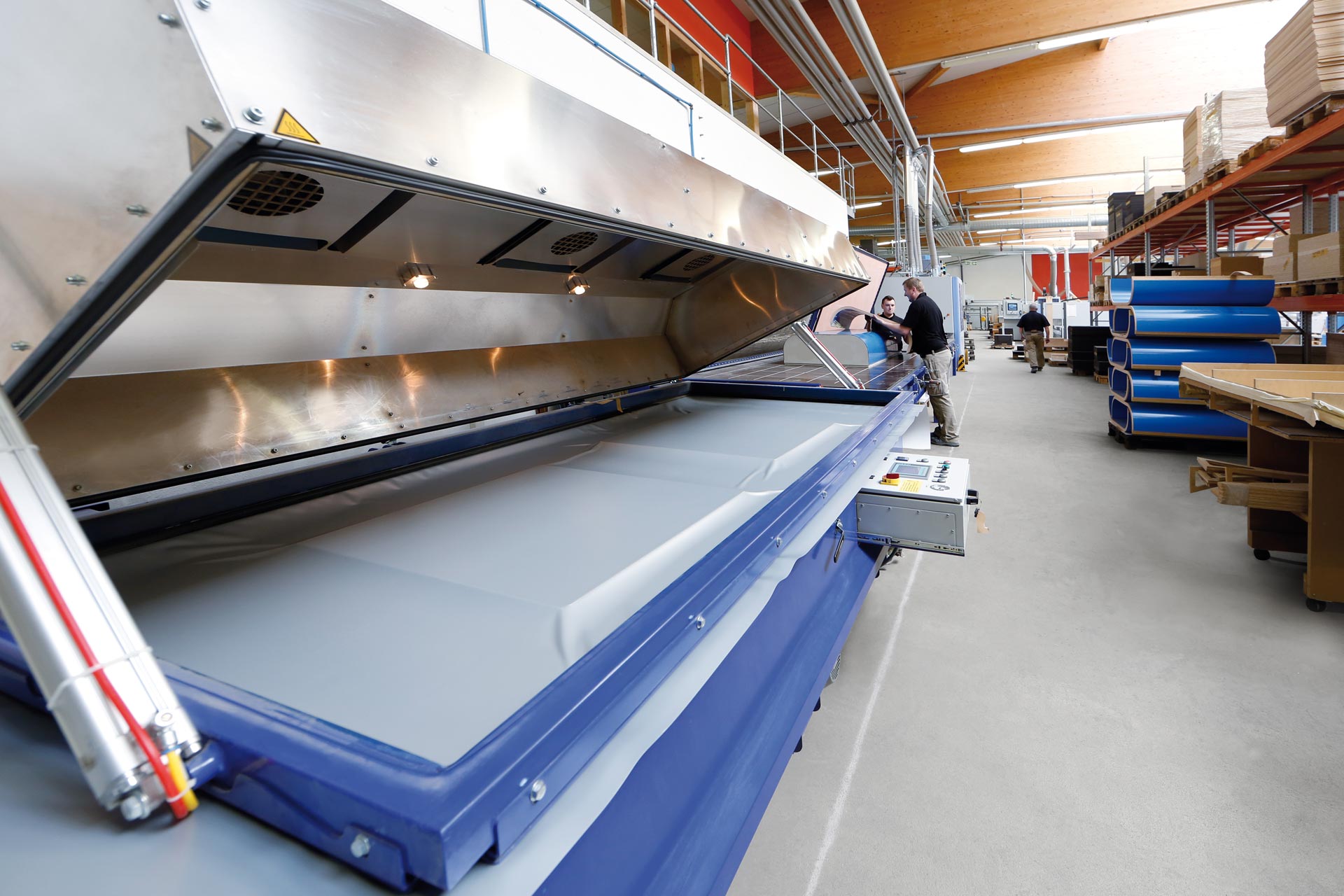 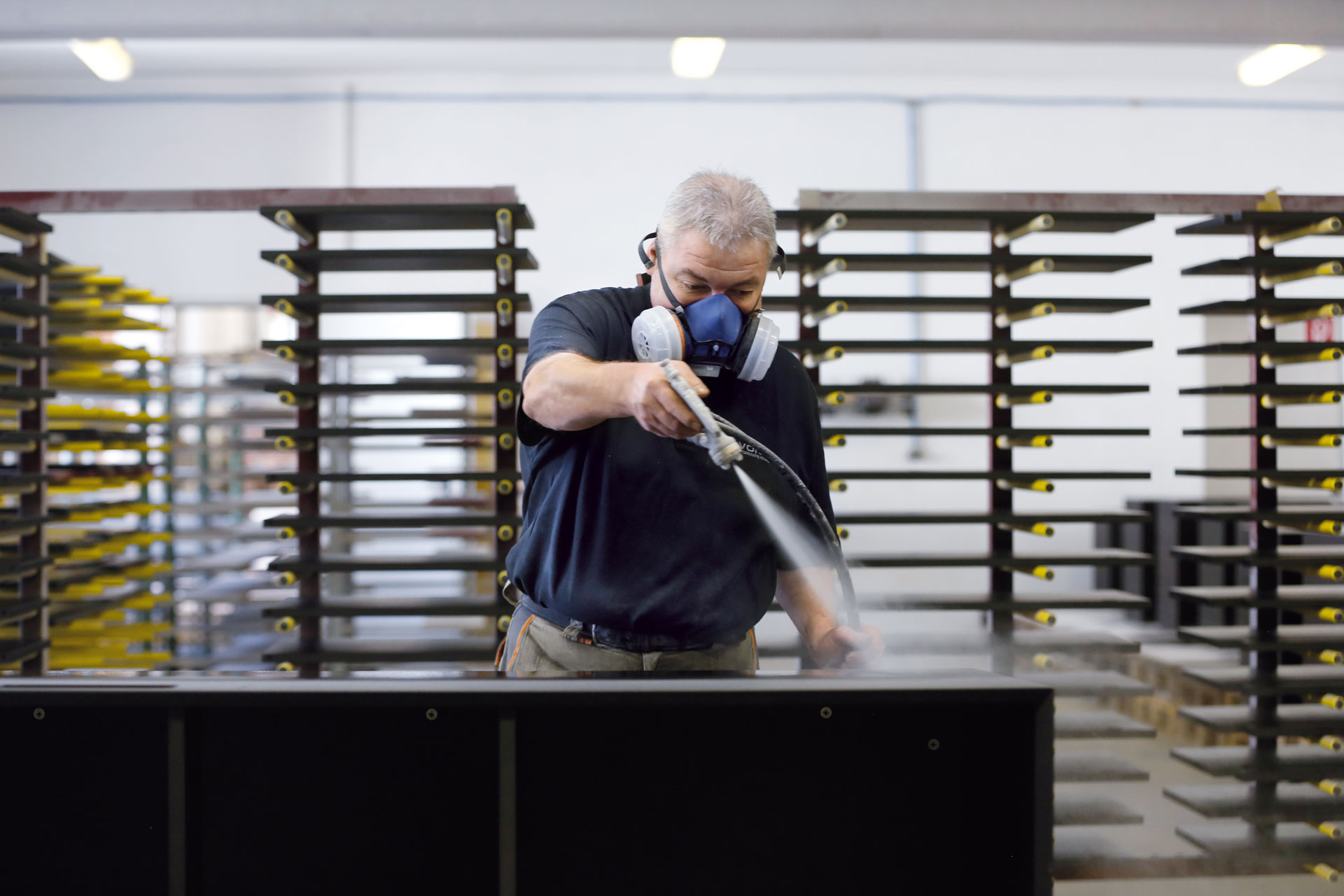 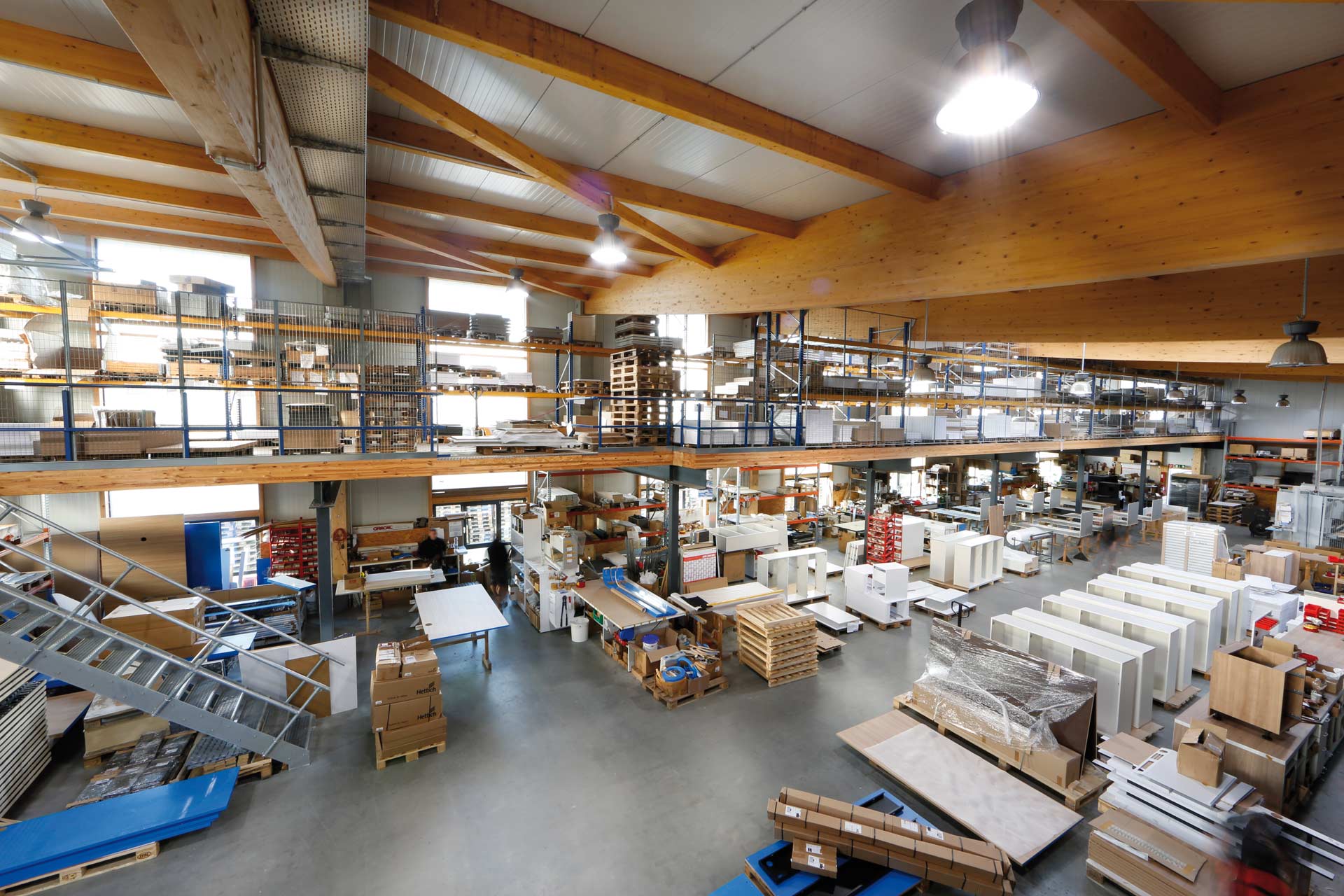 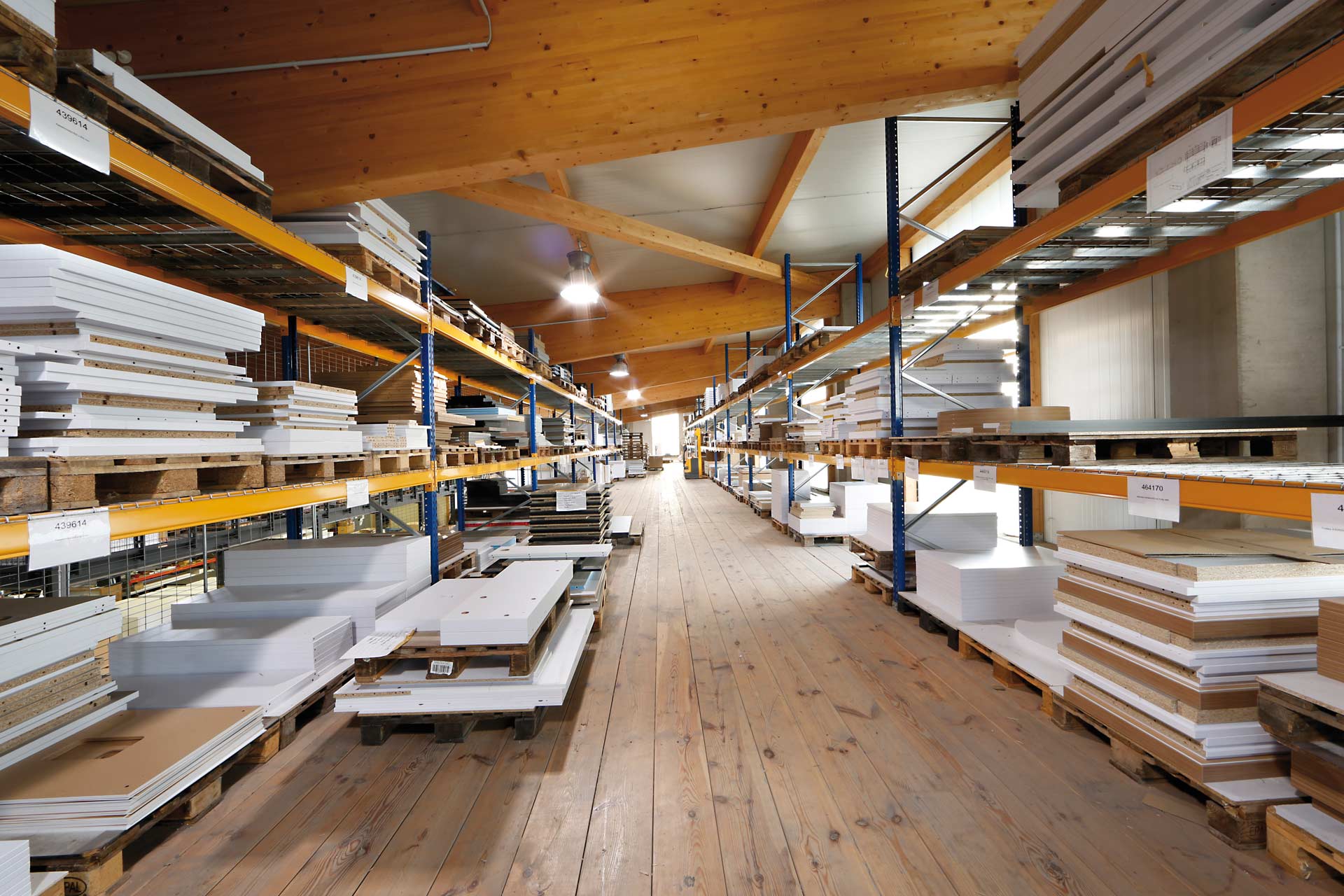 Using a strong sense of tradition to shape the future.

Almost 100 years ago, on 8 July 1919, Stephan Voit I founded the company in Au in der Hallertau. 31 years later his son, Stephan Voit II, took over the company, expanded it and, by 1950, had three employees. The joinery moved to a 750 m² newly-constructed building with a silo for chippings and a new surface production area in 1978 before being taken over by the second Stephan’s son, Stephan Voit III, in 1981.

While growth in the first years had tended to be cautious, in the following 30 years things progressed more quickly. By 1990 the company had 14 employees, increasing to 21 in 1999 and 50 in 2012. Parallel to this, the premises were extended to include two manufacturing buildings. In 2012 Stephan Voit IV and Alexander Voit joined the company. A robot-controlled cutting saw was purchased in 2016 and the former joinery embarked on a plan to implement Industry 4.0.

For beginners and climbers

We are an expanding wood-processing company which specializes in showroom concepts and furniture for the automotive industry. Our customers today include Germany’s leading car manufacturers. Our success is based on three cornerstones – the highest quality; absolute adherence to delivery deadlines and a highly efficient, modern machine park. As a continuously growing company we are looking for committed, motivated employees to participate in our challenging projects.

If you enjoy work; are motivated and would like to join a friendly team; use state-of-the-art machines and work in the beautiful surroundings of the Hallertau region, then email your full job application dossier to info@voit-innenausbau.de